ChatGPT is a long-form question-answering AI platform that permits typing questions conversationally and provides surprisingly human responses. The chatbot relies on a large-language model called GPT 3.5 to transform prompts into logical and understandable text on almost any subject. 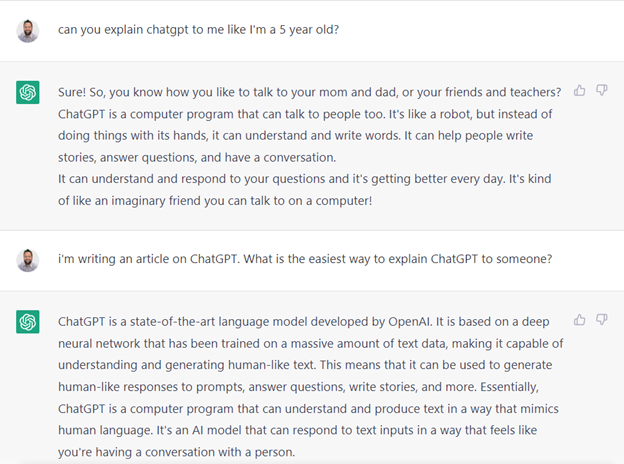 If you’d like to ask ChatGPT for yourself, have at it!

ChatGPT is all the rage for a few reasons. For many, it’s further proof of the progress of artificial intelligence. What makes the tool so revolutionary is that it’s trained to learn what humans actually mean when they ask a question.

What are ChatGPT’s limitations?

ChatGPT remains within an initial research preview state and is not connected to the internet, in that it operates using information with which it was programmed in 2021. Occasionally the AI platform simply produces wrong answers. The tool is also capable of producing harmful instructions and biased content.

When was ChatGPT launched?

OpenAI released ChatGPT on Wednesday, November 30, 2022 and, according to chief executive Sam Altman, gained more than a million users within one week.

Has OpenAI been valuated recently? If so, for how much?

According to an article from the Wall Street Journal, the company is in talks to sell existing shares that place the company’s valuation around $29 billion.

Will ChatGPT compete directly with Google?

We believe the answer is yes. We are not alone, as Barron’s reports.

Microsoft announced in October the company seeks to implement the AI technology within Bing, its search engine that competes head-to-head with Google. The goal is for the ChatGPT technology to make Bing capable of answering search queries in full sentences (instead of just returning pages of links for you to click through).

It’s possible ChatGPT’s AI-powered technologies and language skills could be extended throughout the Microsoft 365 ecosystem of applications and services, too. For something like Outlook, in addition to providing more useful Inbox searches, the AI engine could assist automating email responses — maybe even more capably than Google Smart Reply. AI-enhanced Word, meanwhile, has the potential to be even more powerful, automatically proofreading and correcting documents and scanning them to assist eliminating clunky or jargon-heavy passages.

How accurate is ChatGPT?

Thoughts differ on this question.

But others are optimistic. Mashable says ChatGPT is amazing and creative, at least in some ways. While the site notes ChatGPT often gets facts wrong, journalist Mike Pearl says the chatbot impresses with its ability to incorporate guidance and revise responses.

Pretty much everyone has an opinion. Ultimately, you’ll need to decide for yourself. Just expect updates and improvements to continually improve the AI-powered platform’s performance.

Widespread reports already abound of academics and professionals using ChatGPT to take illicit shortcuts. Students are using the platform to fabricate essays and papers, while others use ChatGPT to perform work they’re supposed to be comprehensively researching, drafting and confirming independently.

OpenAI co-founder Altman faces concerns from some within the AI community, too, for straying from the company’s pledge to make its research transparent. Instead, OpenAI has grown more closed, researchers such as Stability AI founder Emad Mostaque allege. His firm, a competing startup, offers an open source Stable Diffusion image-generation program.